Samsung has recently publicized the U.S. availability of its curved OLED (organic light-emitting diodes) TV, the Samsung KN55S9C. The 55-inch beauty is shipping to some specialty retailers countrywide and will carry a MSRP of $8,999.

In an exceptionally oversimplified explanation, the LED TVs we are used to use tiny light bulbs to light an image on screen, while

OLEDs are light-emitting areas or surfaces activated by electric current.

The merging of OLED image technology and the curved screen is designed to produce “a captivating and vibrant picture that envelops viewers,” as stated by Samsung. The Samsung Curved OLED TV has response times that are significantly quicker than the HDTVs we are used to, effectively putting an end to motion blur and image ghosting and produces “absolute blacks” due to the elimination of any type of back-lighting.

Samsung is also introducing a new feature it calls Multi View. According to the company: “With Samsung’s Multi View feature, it’s like having two TVs in one. For the first time, two people can simultaneously watch completely different full-screen Full-HD content, even in 3D, on the same display, with corresponding audio and controls. The innovative Multi View feature is enabled by Samsung’s 3D Active glasses, which come with built-in personal speakers providing crisp, full stereo sound. Samsung makes it seamless for viewers to switch between the two sources with the touch of a button, without changing glasses.” 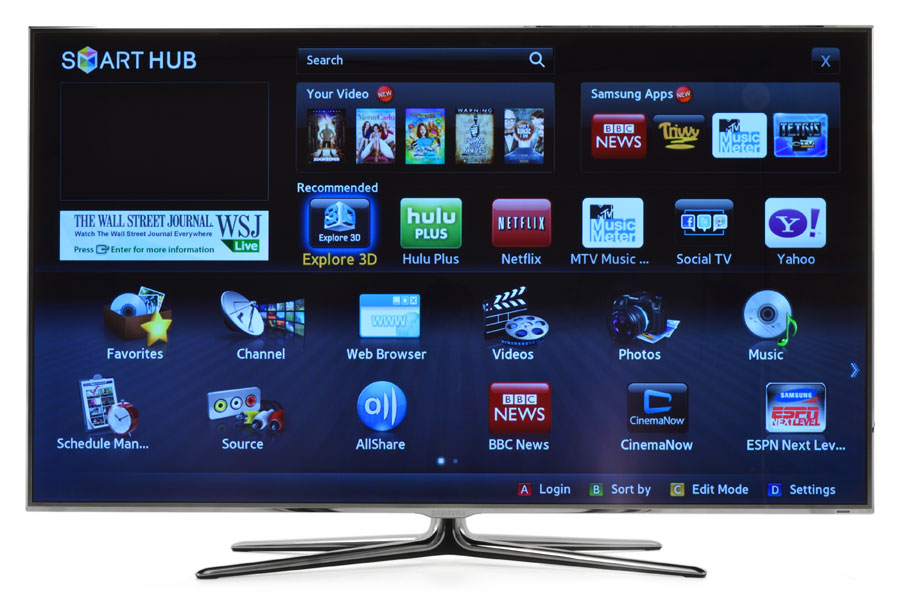 The KN55S9C also features the Samsung Smart Hub interface. According to the Samsung website, “The new Smart Hub allows you to seamlessly navigate through live TV, movies, streaming content, social networks, apps and more so you can enjoy everything you love in one place.”

Another feature that speaks to the OCD in all of us, Samsung says a single cable will handle all the connections to the back of the TV. So, say goodbye to the rats nest of cables that can be found behind the flat screen of most Americans.

The Samsung KN55S9C could be a great addition to your media room or home theater room and is perfect for the early adopters of home theater. It will certainly make your friends and family stare in awe at your next get-together.

At the moment there are no comments. Be the first to leave your review!